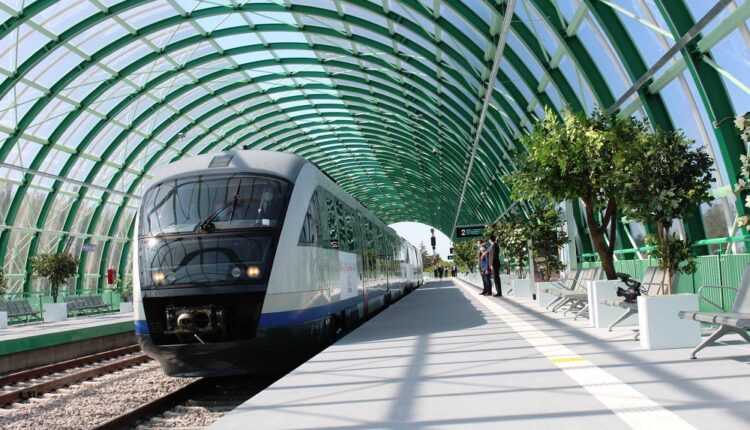 In December 2020, the first trains started running on the route North Railway Station Bucharest - Henri Coandă Airport, Otopeni - Bucharest. I looked forward to this direct rail connection to the airport, in the context of which road traffic is becoming increasingly crowded.

The doubling works of the CF line executed between Mogoșoaia - Balotești and of the construction of the new line for the CF Connection (from the Odăile area) at the T1 Terminal, Henri Coandă Bucharest International Airport were completed and received. The traditional ribbon was cut, the classic image bath of politicians was made and, in theory, everyone is happy because we have trains that connect Bucharest to Romania's main airport.

It took some time until the first experience on this railway route. I expected to see the trains full in the context in which the number of flights started to increase in 2021, and the airlines were preparing the new routes for this summer's season. But you see, trains run more empty. Currently, thanks to the EURO 2020 matches, the daily average of passengers carried on this route exceeded 1000 people. Given that there are several dozen trains a day from CFR and private companies, the number of passengers transported is still very small.

Following the experience I had, I identified, I say, 5 reasons why trains from / to Otopeni Airport have no passengers. No, price is not the issue, in the context in which a trip costs a few lei.

Lack of a common ticketing system

Lack of synchronization between trains, other means of public transport and aircraft

There is no connection with the metropolitan area of ​​Bucharest

BONUS! Constantly, all this work with the railway section between Gara de Nord and Otopeni Airport is mainly addressed to Bucharest residents, not to tourists or foreigners. As I said above, the lack of communication, the lack of information and the lack of marketing actions could bury this service.

Yes, the train is necessary, it is good, it is fast compared to other means of transport, but only from Gara de Nord to Otopeni Airport and back. But it is not enough just to have this service to be passengers. There are many more things to adjust, do, develop… But who should do them?

The 10 most famous and beautiful castles in Great Britain