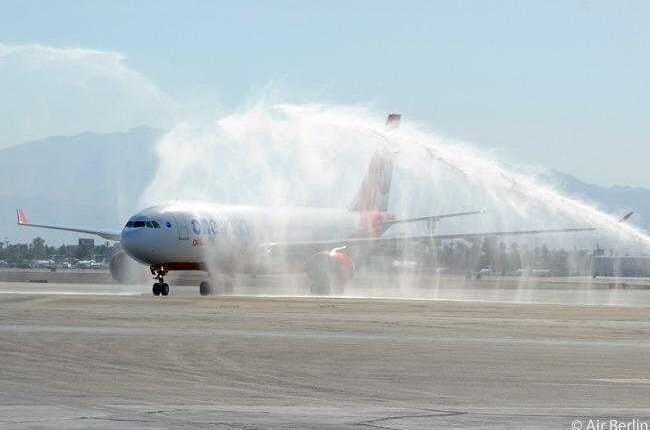 By Sorin Rusi Last updated NOT ANYONE. , NEVER
1 313
Share FacebookTwitterPinterestLinkedinWhatsApp
Delayed plane? Flight canceled? >>Claim compensation now<< for delayed or canceled flight. You can be entitled to up to € 600.

In addition, AirBerlin has announced it will operate three weekly flights on the route Düsseldorf - Los Angeles all year long and not just seasonal as it is so far.

AirBerlin will also increase the number of weekly flights from 4 to 6 on the route Düsseldorf- Miami, throughout the year. Thus, AirBerlin embraces the idea of ​​a dedicated hub for North America in Düsseldorf.

Guests of honor at the inaugural ceremony of the route were future marriages Yvonne Schröter and Denny Hienzsch. The couple participated in a contest on the AirBerlin fans page on Facebook and won a trip to Las Vegas with AirBerlin and the wedding ceremony.

Starting with 11 May, AirBerlin will connect the German capital Berlin with the US city of Los Angeles, on the west coast of the United States. The summer program has three weekly flights operated by an Airbus 330-200 from Berlin to Hollywood. The inaugural flight was celebrated in Terminal B, at Berlin-Tegel airport. Flight AB7022 took off with 191 of passengers on board.

AirBerlin is the second largest airline in Germany. The carrier has 9.200 employees and one 170 fleet of aircraft, with an average age of five, being one of the most modern fleets in Europe.

AirBerlin fly to 162 from destinations in 40 countries. In 2011 it carried over 35 millions of passengers. AirBerlin became a member of the OneWorld alliance on 20 in March.

Boeing 720 and the last flight