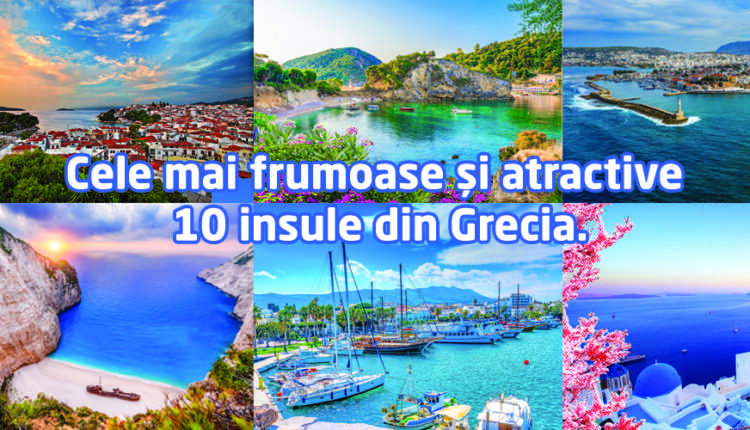 The 10 most beautiful and attractive islands in Greece.

Greece is a country that attracts millions of tourists from all over the world, being also in the top of Romanians' preferences. In our experience, Greece is the destination that never disappoints, regardless of everyone's claims.

The land of the gods offers everything: paradisiacal landscapes, beaches with azure waters and fine sand, unforgettable culinary experiences for our taste buds, fun, blessing, many tourist attractions, history and traditions.

But there are far fewer dedicated to tourism, and we will tell you about the 10 most beautiful and attractive islands in Greece, considered the most popular.

The most popular islands of Greece!

The island is part of the Dodecanese Archipelago, being the third largest (after Rhodes and Karpathos) and the second largest in number of tourists (after Rhodes). The island of Hippocrates, as it is also called, is a small island in southern Greece, 8 km from Bodrum, Turkey. The island has a population of 30.000 inhabitants and covers an area of ​​40 km2.

Roman-style buildings, the mountains of Kos - which are not very high, but which create a unique landscape, quiet bays or beaches that stretch for 100 km, all these things make the island one of the most loved by tourists. The locals are farmers, fishermen or farmers. The main crops on the island are grapes, almonds, olives and tomatoes.

Rhodes Island is the largest island in the Dodecanese Archipelago, but also the most visited. It is the fourth largest island in Greece, located 18 km west of Turkey, between the mainland of Greece and the island of Cyprus, at the intersection of the Aegean Sea and the Mediterranean. The island has a population of 90.000.

Rhodes has many historical sights, being also a medieval city. Called "Rose Island", Rhodes has other advantages: accommodation is cheap and locals speak English. The northern part of the island is famous for its sights, and the southern part is calmer, perfect for relaxation, especially since the beaches are not crowded.

The island of Lefkada is part of the Ionian Islands of Greece, being located on the west coast of the country. It is the fourth island in the Ionian Sea, very close to the mainland. The capital is Lefkada Town and is connected to the mainland by a floating bridge. Therefore, Lefkada is the only island that can be accessed directly by car. The island has 117 km of coastline and a population of 20.

The island will amaze you with its beaches surrounded by white rocks (the Greek word "lefkada" translates as "white island"). There are lots of activities you can do, from hiking, biking to paragliding or diving. The island of Lefkada has a large number of beaches whose characteristic is the blue-green waters, a feature that makes them popular around the world.

Corfu is the northernmost of the Ionian Islands and is one of the most visited in Greece, with over 1 million tourists annually. Called the "Emerald Island", it is located between the Ionian Sea and the Adriatic Sea, very close to mainland Greece and Albania. The island has 600 km and a population of 100.000 inhabitants.

There are resorts especially dedicated to families with children or young people eager to have fun. The island has a wide variety of attractions for tourists: the northern and eastern part of the island is for those who want adventure and water sports, fun and nightlife, and in the south and west we find quiet and secluded areas, perfect for those who they want a relaxing holiday or for those with children.

Zakynthos is one of the most beloved Greek islands. Favorite of Artemis and Apollo (or so it is said), due to the idyllic landscapes, crystal clear waters, beautiful sunsets and mild climate. Named "Il fiore di Levante" ("flower of the east"), the island is part of the Ionian Islands group, with about 123 km of coastline.

The island is home to some of the most famous beaches in Greece (Navagio, Laganas and Volimes). The island is one of the last refuges of the sea turtle Caretta-Caretta and the Mediterranean seal Monachus-Monachus. Because they are on the verge of extinction, for their protection, the Marine National Park was established in the Gulf of Laganas.

The island of Crete is the largest island in Greece, with a population of 600.000. Located in the eastern Mediterranean between Europe, Asia and Africa and has a special charm because the mountains meet the sea. The island is one of the most sought after in Greece, being bordered by bays and bordered by pristine islets, beaches with turquoise waters and fine sand.

The island is ideal for diving due to the clarity of the water - with a translucency up to a depth of 30 meters, allows the observation of species of fish, marine animals, plants or corals.

The island of Skiathos (in translation "Shadow of Athos"), is the most famous island in the Northern Sporades Archipelago, a small picturesque island of 50 km2 located in the Aegean Sea, two hours away from the mainland.

The small island has over 60 beaches: the most beautiful is Koukounaries beach, but there are dozens of other small and secluded beaches with fine sand and emerald waters, reminiscent of the Caribbean.

You can stroll around the island on a rented yacht, look for hidden bays or anchor on secluded beaches accessible only from the sea. For those passionate about adventure, water sports are popular on the island.

Skiathos Airport is famous for its aviation enthusiasts. Many avgeeks call it St. Maarten of Europe. When the weather is good, hundreds of people gather on the road and beach at the end of the runway to enjoy the planes. Low altitude crossings, but also the jetblast are the main attractions.

Mykonos is one of the most famous islands in Greece, especially for nightlife, being the favorite destination of Hollywood stars. Located in the middle of the Aegean Sea, between the islands of Tinos and Naxos, the island is an agglomeration of alleys with whitewashed houses. The island has an area of ​​85.5 km2. and about 11.000 inhabitants.

The capital is Mykonos (or Hora). The beaches with white and very fine sand, nightlife, but also the wide range of water sports, attract many tourists from Western Europe, although it is one of the most expensive holiday destinations in the world. It is compared to Ibiza, both for its nightlife, but also because it is a destination frequented by the LGBTQ + community.

The island of Santiorini is located in the Aegean Sea, about halfway between Athens and Crete and is part of the Cyclades Islands Archipelago of Greece. The island has a population of 13.600 inhabitants and an area of ​​73 km², the capital of the island being the city of Thira.

On the island we find hotels, restaurants and countless bars and taverns to support tourists when they relax after visiting the sights or the ruins of the archeological site of the ancient city of Thera. Santorini has two well-known beaches, Perissa and Kamari, characterized by black sand. Santorini is known for its fairytale sunsets.

Thasos or Thasos is an island in Greece located in the northern basin of the Aegean Sea, 8 km off the southern coast of Thrace. Its area is 398 km2, being the 12th largest in Greece and the northernmost of the islands of the Greek archipelago.

Thassos is considered the emerald island of Greece. Black it is rocky in the east and west and sandy in the north and south. Thassos is considered a mountainous island, the highest point being Ipsarion (1127m). Due to the climate, insual Thassos can be visited at any time of the year. Don't be surprised if you see pine and pine forests in contrast to beaches with clear waters and fine sand.

The most beautiful and popular beaches in Thasos are Golden Beach and Paradise Beach (nudists). But there are also the beaches of Alyki, Skala Prinos, Tripiti Beach, Psili Ammos or Potos Beach.

That being said, get ready for the summer season and we hope to inspire you in your decisions about your chosen destination.

We are waiting for you to tell us which is your favorite island and the experience lived in Greece.