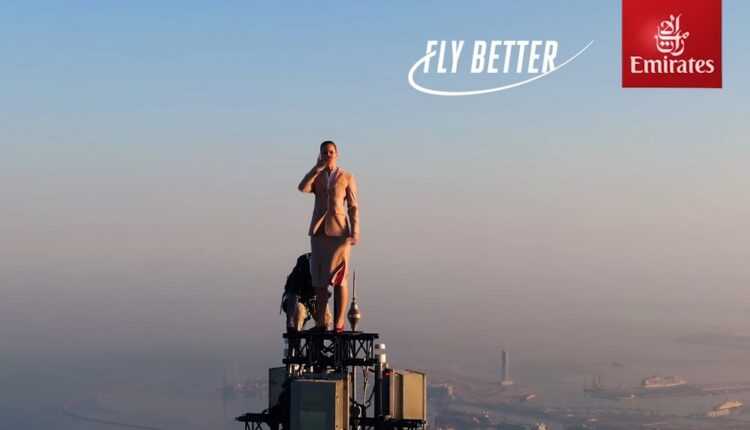 What do Tom Cruise, the Crown Prince of Dubai and an Emirates cabin attendant have in common?

In 10 years of airlinestravel.ro, we have seen hundreds of marketing campaigns and commercials of airlines. Some of them were emotional, others very bold, brave, impressive. Emirates is one of the airlines with very bold advertising campaigns.

But there is nothing above the new advertisement that the Dubai airline has launched these days. We can say that it is a campaign at height, literally and figuratively, because a member of the Emirates cabin crew is standing on the tallest building in the world - Burj Khalifa - at 828 meters above the ground.

The cabin attendant joins a small group of people who have had the privilege of sitting on the tallest buildings in the world. Among them are Tom Cruise and the Crown Prince of Dubai, Sheikh Hamdan bin Mohammed bin Rashid Al Maktoum.

The 30-second clip begins with the cabin crew member holding the messages in a manner similar to the "Love Actually" scene. As the camera moves away, the audience discovers that the Emirates cabin crew member is actually sitting right on top of the Burj Khalifa.

Because there were voices that said that everything is a fake, Emirates wanted to show us how this commercial was made and it really wasn't a fake.

The campaign aims to promote the resumption of flights from the United Arab Emirates to the UK, one of the largest markets to which Emirates flies.

IATA report: 2020 was the weakest year for air transport, registering a decrease of 60.2% in the number of passengers carried compared to the previous year.