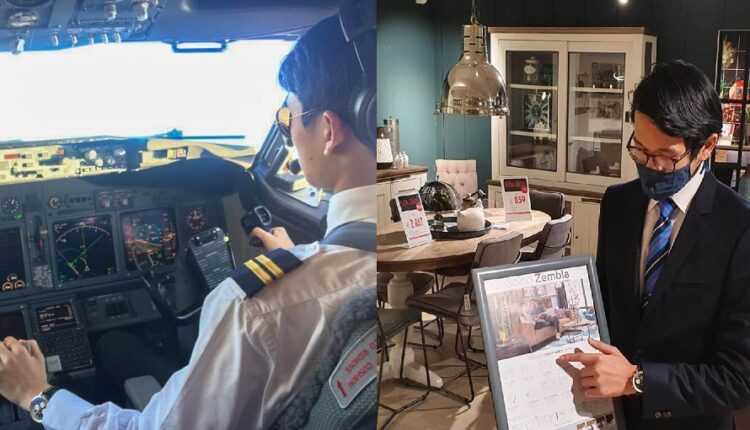 The story of the day: from pilot to furniture seller.

Just one month after the first flight, Maxim De Leeuw's pilot career came to an end. After finally fulfilling his childhood dream of becoming an airline pilot at Corendon Dutch Airlines, Maxim changed his plans for the future and began to develop his own start-up.

Always fascinated by technology and air transport, in March 2020, after more than two years of training, Maxim completed the pilot course for Boeing 737-8000 aircraft.

However, Maxim's pilot career lasted only a month. The airline terminated his contract due to the Covid-19 pandemic, despite the company's huge investment in the training process.

"I'd rather he fired me than pay me and the airline go bankrupt."

"When we started flying for the airline, there was talk of a pandemic. […] At first, I was disappointed to hear that I was fired, but […] it was logical for them to do so. I'd rather he fired me than pay me and the company go bankrupt. […] The company has made a huge investment in me and I know that if they could have kept me, they would have done it. ”, said Maxim.

Even when Maxim realized that he would be able to obtain the flight instructor certification, but that he would not have a job, the young first officer did not lose hope of returning to fly planes for the same airline.

"I left the airline knowing that at any moment I will be hired again and I will start flying aircraft for the same airline again.", added Maxim.

"The pilot realized that getting a job in another industry would be impossible."

The pilot realized that getting a job in another industry would be impossible because employers understood that when the opportunity arose, Maxim would return to his old job. The pilot moved back to his parents' house in Belgium and received an offer to return to his first job as a salesman in a furniture store.

Uncertainty in the aviation industry encouraged Maxim to start a secondary business. After many months of consideration, the pilot realized that he had to find other profitable activities besides aviation. Thus, Maxim decided to start an advertising and consulting business called Flight Goal.

Maxim says the main goal of his business is to bring the specific mental model that pilots use in aviation to other companies, as well as creating specific content, such as filming and editing corporate commercials.

Even though the business is still in its infancy, Maxim does not need significant initial investment.

"I took the time to see what I could do if aviation was no longer an option for me. That's why I recently decided to start my own business on my own, which I will be able to run even if I am a pilot. Basically, I bring the aeronautical mentality to everyday business. […] Once I fly again, I will still be able to combine these two activities while offering my clients services from my own skill set. ”

Although he has ambitions to develop and expand his start-up to gain more customers in the next few years, Maxim says his desire to become a pilot still tops his list of priorities. To remain a competitive professional, Maxim continues to learn the secrets of aviation.