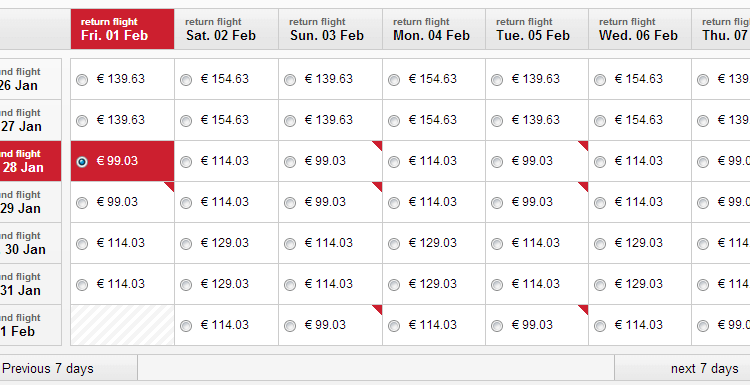 Bucharest - Berlin with AirBerlin from January 28, 2013

In November, following some information received for the first time in Romania, I did some research on the AirBerlin group. I had been whispered that Flyniki will no longer operate the Bucharest-Vienna route from the 2013 summer season. I checked and so I found that from 2013 AirBerlin will make direct flights between the capital of Germany and the capital of Romania.

The German carrier wants to strengthen its position in Central and Eastern Europe by opening routes to Sofia, Gdansk, Krakow, Kaliningrad, Moscow, St. Petersburg and Budapest. Also, as of March 23, AirBerlin will also fly to Warsaw. All these changes are part of the strategy of the AirBerlin / FlyNiki group for 2013, a year in which it wants to bring the company to profit.

Below you have the price calendar for January - February and the evidence with the hours per day. It took me 7 days to juggle the AirBerlin search engine more easily.

In the autumn of this year, I flew Berlin on the route Bucharest - Vienna with FlyNiki and Vienna - Berlin with AirBerlin!

On the route Berlin - Bucharest, Lufthansa also operates (4 flights per week, and from the summer season 2013, 5 flights will be operated), and the prices are close. So now you have several options for Berlin. If you have loyalty cards, I mention that AirBerlin is part of the OneWorld air alliance, and Lufthansa is in the Star Alliance!